Most couples will initially present relationship difficulty as “a communication problem.” Many workplace conflicts will be “resolved” by a commitment to better communication. Stacks of volumes have been written about communication in all sorts of relationships and settings. In this little postlet, I want to highlight the role of emotions in contentious discourse. Reversing course, let’s start with the solution. 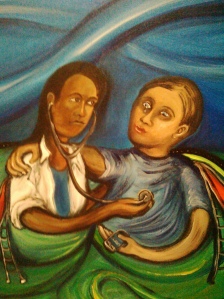 “Heated” arguments are fueled by emotion and become self-perpetuating and never-ending when the content becomes the emotions themselves. We assume that the negative emotions of others are direct messages to us conveying that we are doing or have done something wrong. Their emotions are heard as our put-downs. (Technically, this is shaming and therefore most verbal/emotional fights are shame battles.) Probably this interpretation is the strongest and hardest to counter in couples’ conflicts, because the stakes are higher than in all other relationships. To counter this offense, I attack what I see as the source, the other’s emotion. Your feeling is wrong! How dare you!! (express that offensive feeling with no justification). Your “behaviour” is totally unwarranted. I have just invalidated the other person’s experience. S/he will definitely not like that (also highly shaming). When I say “attack,” I of course mean with anger. Then the process reverses and we are in an infinite loop.

Arguments about emotions are false from the premise and so there is no winning. Each thinks they can win by a better justification of their feelings and a more effective undermining of the other’s feelings. Such a communication strategy only inflicts a mutual emotional beating.

The effective response to someone’s emotion is empathy. The better response is compassion. The best response is mercy.