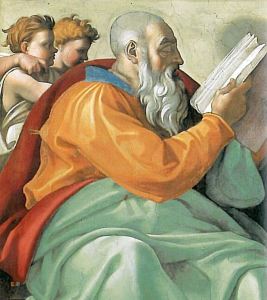 A wise manager – who is only wise because he learned from outside as well as inside his field – gave me this memorable parallel between corporate and religious leadership. People “of the Book” (Jews, Christians, Muslims) are all familiar with the history of the prophets. They critique the system from within, though from the margins of the organization. Prophets do not predict the future in detail but call out trends, disruptions, downward slides and divergence from core values. They see a higher ideal, a higher level of group consciousness. An organization with no capacity or tolerance for self-criticism will blindly march toward irrelevance or extinction.

But prophets are rarely popular within their organization. They do not win mass conversions and in biblical times they usually ended up dead (now retired, fired, transferred, sidelined, etc.) (Mark 6:4). They face the priesthood, whose job it is to justify and perpetuate the system. Priests provide continuity, policies (dogma), procedures (rituals) that allow the organization to join forces and move as one; they embody and give voice to the company. Every organization is self-justifying and self-perpetuating, just like every organism. Criticize it and the priests will circle the wagons. This is just normal reactivity, not some kind of evil.

Priests have a much longer life expectancy than prophets in corporate leadership. Know which one you are before you invest too much in that career path.